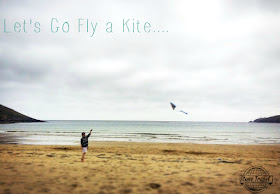 This past weekend saw us pack up Mammy Van for another road trip, this time to Cork, arguably the most relaxed and carefree County in Ireland. We’ve been many times over the years (a simple word search on the left there will show you that) It’s a place that I’m sure we’ll be visiting for many more years to come as there’s simply so much to see and do in the Rebel County. 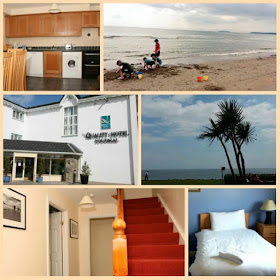 A couple of months ago I spotted a deal on Pigsback.com for 2 nights in a self catering house that sleeps 6 on the grounds of the Quality Hotel in Youghal, Co Cork for €149. I snapped it up and immediately booked for the weekend of Friday 13th May.

The hotel is located right beside Red Barn beach in Youghal, so it’s perfect for a leaving the car or Mammy Van in my case and taking a stroll to the beach for some family fun, which is what we did on Sunday morning; we spent a glorious two hours making sand castles and dipping our feet in the sea. I have to admit, I’m really not a beach person when there are children involved as sand gets into everything. A great tip I stumbled upon was to use baby powder, it works wonders taking sand off little feet when you don’t have access to water.

The Quality Hotel has oodles for children to do; in addition to the beach on their doorstep they have a supervised kids club, swimming pool, playground and a cinema club. Unfortunately as we were so busy we didn’t even get to go into the hotel, bar checking in & out! 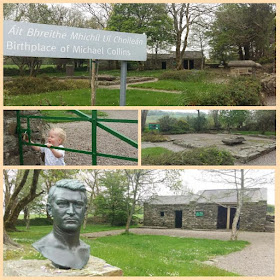 Our 8 year old son Seamus is Michael Collins mad he idolises him, so much so that we had to do a Michael Collins trip around Cork for him, you can have a read of that post HERE.

The last time we were in Clonakilty, Cork County Council was in the middle of renovating Michael Collins’ old house to open as a museum. It finally opened to the public two weeks ago so we took a road trip of about an hour and a half from Youghal to Clonakilty on Saturday to visit. 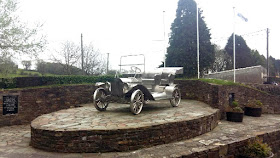 On the way we stopped at the memorial to Henry Ford in Ballinascarthy just outside Clonakilty, it was his father William Ford’s birthplace. A full size metal Ford Model T sits on a raised plinth at the side of the road; our little ones love stopping at it for a quick ‘drive’ and a photo every time we pass. 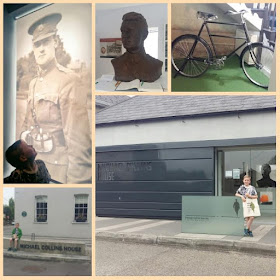 Michael Collins House is only open weekends at the moment, admission prices are €5 per adult and €2 per child, our 18 month old was admitted free of charge. The three storey house has been restored beautifully; no detail has been overlooked. We learned more about Collins and his political history as we made our way from room to room. Seamus loved it but I couldn’t help but feeling that it was lacking something, perhaps it might be that there weren’t many artefacts on display. We’ll visit again over the summer but I’m sure it’s just because it’s only newly opened.

No trip to Clonakilty is complete (well for us anyway) without paying a visit to Edward Twomey’s butchers to buy some of his finest Clonakilty pudding, sausages and rashers, he also sells cooler bags which come in very handy if you’re not going straight home. 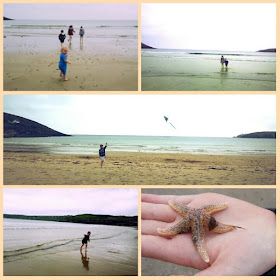 West Cork is home to some of Ireland’s most scenic beaches dotted along the Wild Atlantic Way. We visited Owenahincha beach for a picnic then on to Red Strand to fly our kites. Inchydoney and Barley Cove are some of our other favourites in the locality. 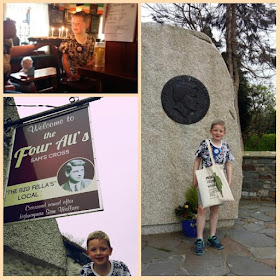 We had to pay, our now annual, visit to Michael Collins’ home place, Woodfield at Sam’s Cross and on to the Four All’s, the bar where Michael Collins had his last pint in August 1922 for a surprise birthday cake for Seamus’ 8th birthday. If you do get to visit, fill up with petrol or diesel at Lisavaird Co-op as it’s the cheapest for miles and has been for years, they also sell local produce so we stock up on some of our favourite homemade preserves each time too. 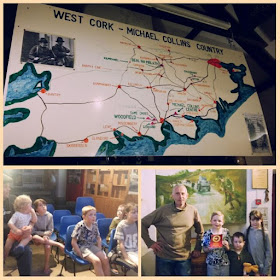 Tim and Dolores Crowley own and run the Michael Collins Centre just outside Clonakilty; it opens seasonally so we’ve missed it every time we’re in Cork. My husband Colin called Tim and he very kindly met us late in the evening and opened up the centre for us to have a quick look as he had heard how much of a Collins fan our son Seamus is. Tim, a cousin of the Big Fella is a wealth of information on everything Collins related. It’s easy to see why he prefers to give live lectures when the centre is open rather than play a video.

He got a great kick out of our little ones when he was asking questions and they knew the answers, he liked that Seamus had a passion for learning about Michael Collins and Irish history from such a young age. Granted our visit to Michael Collins House earlier that day helped them brush up on their history.

Our youngest lad Lorcan was overtired and began to cry so I took him outside while the rest of the family enjoyed listening to Tim regale them with stories of Collins and his time in Cork. Seamus was delighted with himself when Tim gave him a book he had written about Collins; he happily signed it for him too. Seamus later said that it was the best birthday present he could have asked for! 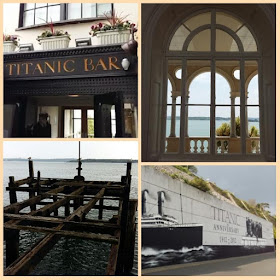 One of my favourite towns in Cork, Cobh is a forty minute drive from Youghal. After a morning on the beach we decided to take a drive out to Cobh for a stroll around town. Cobh is home to the Titanic Experience and Cobh Heritage Centre ‘Queenstown Experience’ we’ve been to both before and I highly recommend them.

We were lucky when we visited as the cruise ship MSC Splendida was docked in port; my lads were in awe of its size. Cobh Readers and Writers Festival was on so it gave the town a real party feel. Two live music stages were in the middle of town, a farmers market and loads of pop up shops selling books added to the lively atmosphere. We had a wonderful day so we stayed a lot longer than we had planned.

Dinner on Friday was on the road to Youghal, we stopped in Mitchelstown for pizza in Supermacs, not one of our best decisions. I made breakfast both mornings in our house in Youghal; Saturday was a continental affair while Sunday was a spread from Twomey’s in Clonakilty. Lunch on Saturday was a picnic on Owenahincha beach after a visit to Lidl in Clonakilty for the essentials. Always being picnic ready is one of the many reasons I love my van, there’s plenty of room for a couple of picnic bags and blankets in the boot.

We were very late for dinner on Saturday night so we chose to dine in at Billies Drive Thru just outside Bandon. It’s a fast food restaurant with home cooked chips; everything is made to order so a little less of the fast. It set us back just €43 for fish finger/fried chicken/burger meals for 2 adults 4 children and a baby bowl of mash and beans including drinks. I saw that the lunch menu is much more comprehensive than the evening menu, no wonder the place is always heaving with truckers during the day.

Lunch on Sunday was in one of my favourite places in the Country Titanic Bar and Grill located under the Titanic Experience in Cobh. Fish and chips for the children, a baby bowl, starter and mains for us with drinks including two glasses of wine for me cost a total of €73. It’s a very reasonable price for lunch for a family of 7. They have a huge outside seating area overlooking what remains of the White Star Line pier that 123 people boarded tenders to ferry them out to the Titanic which was anchored near Roche’s Point. I have a keen interest in everything Titanic so I guess that’s one of the reasons I love Cobh so much.

All in all it was another fantastic adventure in the Mammy Van and another successful trip to the Rebel County; which we'll probably never tire of visiting. Have you been to any of the places we visited this weekend? What did you think? Did we miss anywhere?